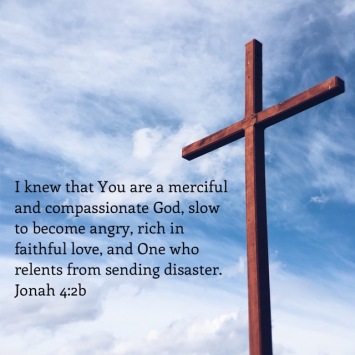 We have to remember when we read the story of Jonah that Jonah knew God. He was a prophet and if we read through the Bible we see he first appears in 2 Kings 14:25 which means he had been a prophet for some time before he was sent to Nineveh. Jonah knew God and he knew God was merciful and compassionate. Jonah ran from God not because he was afraid of the Ninevites, but because he knew God would forgive them.

Jonah did not want to go to Nineveh (the capital of Assyria) because of his hatred for the Assyrians. The Assyrians were enemies of Israel who were a) not to be messed with and b) by all accounts had no interest in turning to God. They were perfectly happy in their wickedness. Jonah as far as he could tell had no business going to preach repentance to a people who would not want to hear and that he did not even like. As is often the case God, however, had other plans.

When we read the Bible we are constantly confronted with the fact that God has plans that differ from ours. In Isaiah God says my ways are not your ways, in Psalms, it says God’s plans stand forever, and in Ephesians, it says He works all things out in agreement with His own will. Even we look at Jesus coming we see that it did not transpire the way the people expected and because it did not come as they expected they could not accept it. Over and over again God shows He has His own plans.

Jonah knew this about God and did not want to go to Nineveh because even though God did not say He would forgive them Jonah knew it was in His nature to show compassion. Jonah knew God well enough to know that about Him and sure enough the people repented and God showed compassion. God still shows compassion too. He has shown it to me and to you even if you do not know Him. We live because God shows compassion. There’s a term called grace that we love and throw around in the church and it basically means unmerited favor or God giving you good when you don’t deserve it.

God’s grace is huge and I think we can overlook it sometimes. Grace means God doesn’t strike you down for the sins you commit or even will commit. Think about this; God knew before you were born you would sin against Him and He still chooses to have you come into being. He knew you would sin against Him and not choose Him and He still loves you. He knows there are people who will never turn to Him but He still calls them. That is a love that is beyond understanding. God might be calling you right now. He might be telling you to call someone else. He might be telling you to go and do something you think is beyond you. He does this all from a place of being merciful, compassionate, and full of grace.