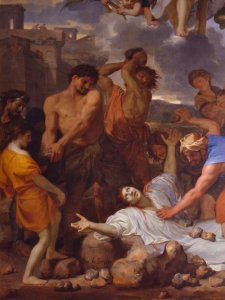 Let’s get something straight from the beginning; Stephen was the man. I mean seriously he did not waste anytime. He received Christ and got to work both serving and teaching. Boy oh boy did he know his stuff too. He was one of those Christians that gets saved and then runs around telling everyone. He was what I call a Christmas Tree Christian because he was lit up.

Like I said Stephen knew his stuff too. His sermon (that one that got him killed) takes up an entire chapter in Acts all 53 verses of chapter 7 is his sermon. He was no Mayweather dancing around the ring either. He went to town on the people around him laying it out from Abraham to Jesus talking about how God told you He would send the prophet and just like their forefathers they too were stiff necked and uncircumcised of heart and ears. I know in our day that does not sound bad but he was basically saying they were just like Gentiles and if there was one thing a Jew in that day did not want to be it was a Gentile.

He then goes one step further and says that their fathers persecuted the prophets (which is true), and just like them you persecuted Jesus the true Prophet. This was saying that they were just like their hard headed fathers and time would prove them wrong. This was the last straw for them they threw him out of the city and killed him.

Stephen was the man. How many times have you or I had to share something that we knew would upset people? I remember giving a message awhile back that I knew would bother some people but I was not afraid they would kill me. I imagine that Stephen knew this could happen but it needed to be said. Sometimes we need to say what needs to be said because it is the right thing. It is not popular, not fun, and will win no friends. But notice something in verse 55. Jesus stands up. Everywhere else Jesus is seated at the right hand of the Father but for Stephen Jesus stands up. It was almost like Jesus was giving Stephen a round of applause.

If there was ever anyone I would want a well done from it would be Jesus. Maybe that means I need to be more like Stephen. Maybe I need to not be afraid to say what needs to be said……