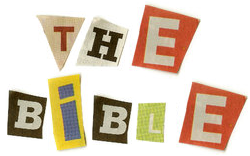 Did I ever tell you about my band in high school? No, well it was pretty awesome. No Longer Silent was the name and the first album was Silent Screaming. Oh, it was spectacular. All the band stuff is now gone but trust me it was amazing. I mean there were no other actual members, and I cannot really play or sing, and no one else ever heard of us (I mean me). But you have to trust me if I could play or sing and had other people who could play and sing we would have been huge. I mean like STP or Alice in Chains huge. Alas, things that never were… The Bible says a lot about a lot. I mean depending on your translation the word count, and verse, count are staggering. The New Testament quotes the Old Testament a number of times as well.

With this many words, chapters, verses, and quotes I would be surprised if it was never misunderstood or misquoted. I, however, am not surprised. It is impossible to not mess it up to some degree because we are all messed up to some degree. You might be wondering at this point what paragraphs 1-2 & 3 have in common. You might think I was just bragging about my awesome band (which in part I was) but in reality, some of you just read paragraph 1 & 3 totally skipping 2 which explained that the band was less than real (OK not real) and that is the point. I did say I had a band and if you quoted me you would be correct. However, if you asked me to play a show and I said I don’t know how to play I would be correct as well. We’re both right to an extent but one of us is very wrong and here’s a hint it is not me.

I don’t want to give specific verses and stories because we all know enough of them, and I don’t want to talk about what the Bible doesn’t say because that is for a different post. Instead I just want to focus on the fact that it does say a lot. I mean really you can make a case for just about anything using Bible verses. Everyone has a verse, and every Christian cause has the “key”, every denomination has the most important verses. We do it all the time. I focus on love because I think that is the most important thing in the Bible. I think that the Bible talks about love in one way or another constantly. I see a beautiful tapestry of love and relationships throughout the Scriptures. I think the whole thing is about love.

I see love in the 10 Commandments, in the wilderness story, in everything I see it. Some would disagree and I can see why. Some would say that the whole point is that God is Sovereign and maybe they are right. We can make a cause for most anything because the Bible talks about almost everything. The key to understanding the Bible is simple, though. I mean if you really wanted to understand what a passage is talking about it’s really easy. You just have the understand the context.

When you know the conversational context, background context, language context, and relational context you can understand what is going on. Most of the issues we face when we don’t understand the Bible and others in general is because a lack of proper context. We place ourself and our understanding into the situation and remove the context leaving us with what we went into it with. You get out of the Bible what you go into it with. If you go in with bias you get bias, if you go into it with material desire you get material desire. If you go into it with a submissive heart, desiring to learn and love God, then that is what you will get. Don’t misunderstand me though. God is good and great and powerful He can easily shake you and show you something that changes everything but if you look at a lot of people who use the Bible as a weapon they got out what they put in. The Bible was written in 3 languages, by 40 authors, in a span of 2000 years, and while there is unity in the Scripture there is enough there to make it say almost what you want. You have to twist it, take it out of context, and imply a lot but it can be done. The best approach is to go to the Scriptures each time with a humble and submissive heart. If your desire is God you will find Him.

A fool takes no pleasure in understanding, but only in expressing his opinion.

p.s. I understand this is a gross over simplification but it is supposed to be, and that is part of the point.