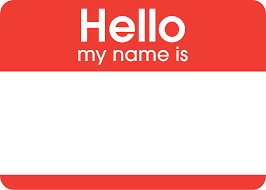 Growing up I was never fond of my name. It is not that I have a bad name it is just boring because let’s face it Mike is pretty generic. I mean there are something like 4 million Michaels in the world so I am not even a one in a million. If I add my last name there is still almost 600 people. I just can’t catch a break. I tried for years to get a cool nickname too. I tried everything I could think of to get one. One summer I ate Tic Tacs all the time hoping someone would start calling me that (I was desperate). All my attempts failed. For a short time people called me by my last name but there are like 46000 people with the same last name so that was no better. I changed the spelling, abbreviated (my initials are useless) so again no help. I realize that Proverbs 22:1 says a good name is better than riches but if everyone has the same name they don’t know it’s me.

I have since gotten over that issue. It was not easy but a process. I realized that my name was not so important. My name and having it be unique would have been cool but it was not really that important. The name of Jesus however is amazing. At His name all will bow and confess He is LORD, and that is the name I am now concerned with.

See I am no longer worried about my name and it being something because I know the one who has a great name. My name while it has a small sphere of influence cannot give people peace. My name has never cast out a demon, or healed the lame, opened the eyes of the blind, or forgiven sin. The name of Jesus is so powerful that in reading this some people will stop because His very name makes them uncomfortable. To others who are His however they are at peace. So just one more time….Jesus!

Colossians 1:17-18 and Colossians in general scream about His name. It says:

“And He is before all things and in Him all things consist. And He is the head of the body, the church, who is the beginning, the first board from the dead, that in all things He may have the preeminence.”

I know there are others but I really like these verses. There is so much there and it has been attacked so much over the years. Some bad theology has come out of not understanding these verses. Things like Mormonism, Jehovah’s Witnesses, and others I am sure I don’t even know about. They say “see right there in the Bible, Jesus is just an exalted man. He was just the first man.” Well forgetting for a second about how that does not line up with what the rest of Scripture teaches. Let’s just focus on the context.

Paul was writing to people who plainly understood that the first born has inheritance rights. I cannot go into nor completely understand eternal Sonship (how Jesus is eternally begotten). The first born was in charge of everything. The term is Primogeniture and it just means the first born male inherits the estate of the father. Think about how kings would give everything to their first born son. It evolved over time in most places and daughters were given rights as well. The important thing here is not gender but stature. The first born got it all.

Those reading this letter from Paul understood that and then understood that it all belongs to Jesus. That is why His name is so powerful, because He gets it all. Everything good is wrapped up in Him and His name. There is something so powerful in His name.

So I may never have a cool nickname I get to use a name that is full of power and authority. I get to use the name of Jesus.